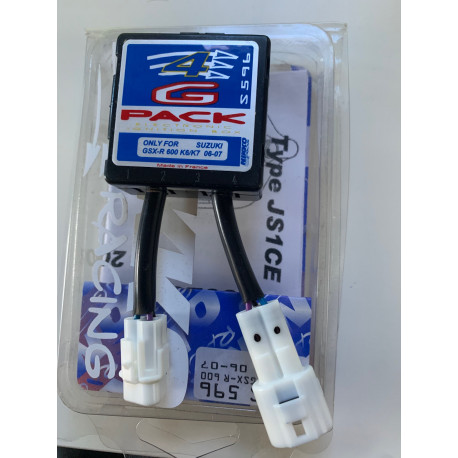 NIKKO RACING has developed the G-Pack module to optimise your engine's performance to the maximum, especially during low and medium speed acceleration. G-Pack has been specially developed to bypass the rev limiters installed by manufacturers who have to comply with the homologation standards imposed in many countries.

The result: more torque and power, lightning acceleration at low revs and a wider range of use,
a much improved driving pleasure.

G-Pack consists of an electronic box that is installed in a few minutes between the sensors and the CDI box of the motorcycle.
Thanks to its compatible plugs, it can be connected to the original wiring harness without any modification.

G-Pack can be disconnected at any time, your motorcycle is back in its original configuration.

It does not require any modification of the engine settings.

Warning: G-Pack modifies the characteristics and performance of your engine.
The use of this module is forbidden on public roads, its use is strictly reserved for competition on closed circuit.