DUE TO THE COVID-19 SITUATION AND THE LARGE NUMBER OF ORDERS, ALL OUR LEAD TIMES ARE EXTENDED. WE WILL DO OUR BEST TO ANSWER YOUR EMAILS.
> Electric>indicator >Led turn signals>Chaft LED indicator Chaft Cobbie 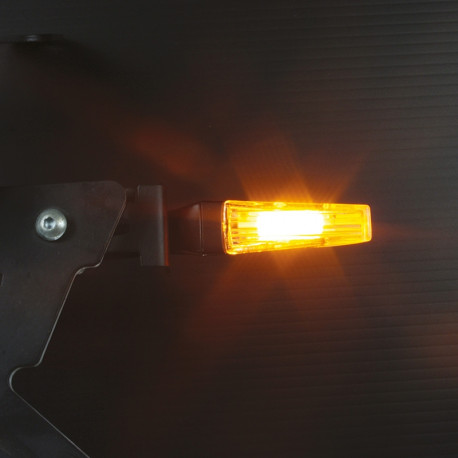 COBBIE is the first CHAFT flasher using the new COB technology. COB LED stands for chip-on-board LED. A COB (Chip-on-Board), is an LED assembly technology that describes the mounting of multiple LED chips directly on a substrate to form a single module. The multiple, tiny LEDs are wired together into a single ceramic or copper board so that they function as a single light source. For example, using COB LED technology on a 10mm x 10mm square results in 38 times more LEDs than DIP LED technology and 8.5 times more LEDs than SMD LED technology. This results in higher intensity and greater uniformity of light. CHAFT Exclusive design, ABS base.

Available in two lens colors, smoked or clear. Delivered in pairs in a transparent box that allows the flasher to be viewed from all angles when on the beam.